Corey Arceneaux (DJ HOT) is a native of Lafayette, Louisiana, and is both a zydeco musician and disc jockey.

His interest in radio started around April 1982, when his great-uncle, Russell Chaisson, and Joshua Jackson opened KJCB, Lafayette’s first Black-owned radio station. As a youngster, Corey sat in the studio with JJ Callier, Sr. for his Zydeco Gumbo Show. Later, Corey’s DJ career started as a substitute for Lester Thibeaux at KVOL 1330 AM. John Broussard and program director Marcus “Dr. Boogie” Dautrieve also brought Corey in as an apprentice on the KJCB zydeco show and handed him the torch in 1991 with the “The Hot Zydeco Show.” While studying Mass Communication at USL, he also filled in at the university’s radio station, KRVS FM 88.7. He later joined KFXZ Z105.9 FM in 2011.

He is one of the few zydeco musicians who plays both the diatonic and the piano accordion. Starting at 10 years old, he was influenced by his great-uncle, Fernest Arceneaux, accordionist and leader of Fernest and the Thunders. His other major musical influences were Clayton Sampay, Buckwheat Zydeco and Clifton Chenier. In 1992, he started his own band, Corey and the Zydeco Hot Peppers. The group has recorded five albums and played domestically and internationally.

Every Saturday from 9 a.m. to 2 p.m., the Z in Z105.9 is for zydeco! Catch five hours of zydeco with a splash of swingout , oldies and southern soul. Think of Hot Sauce Saturday as a hot and spicy mixture of all your Louisiana favorites! Send new music and other requests to [email protected] 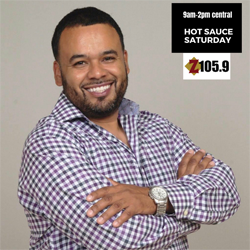